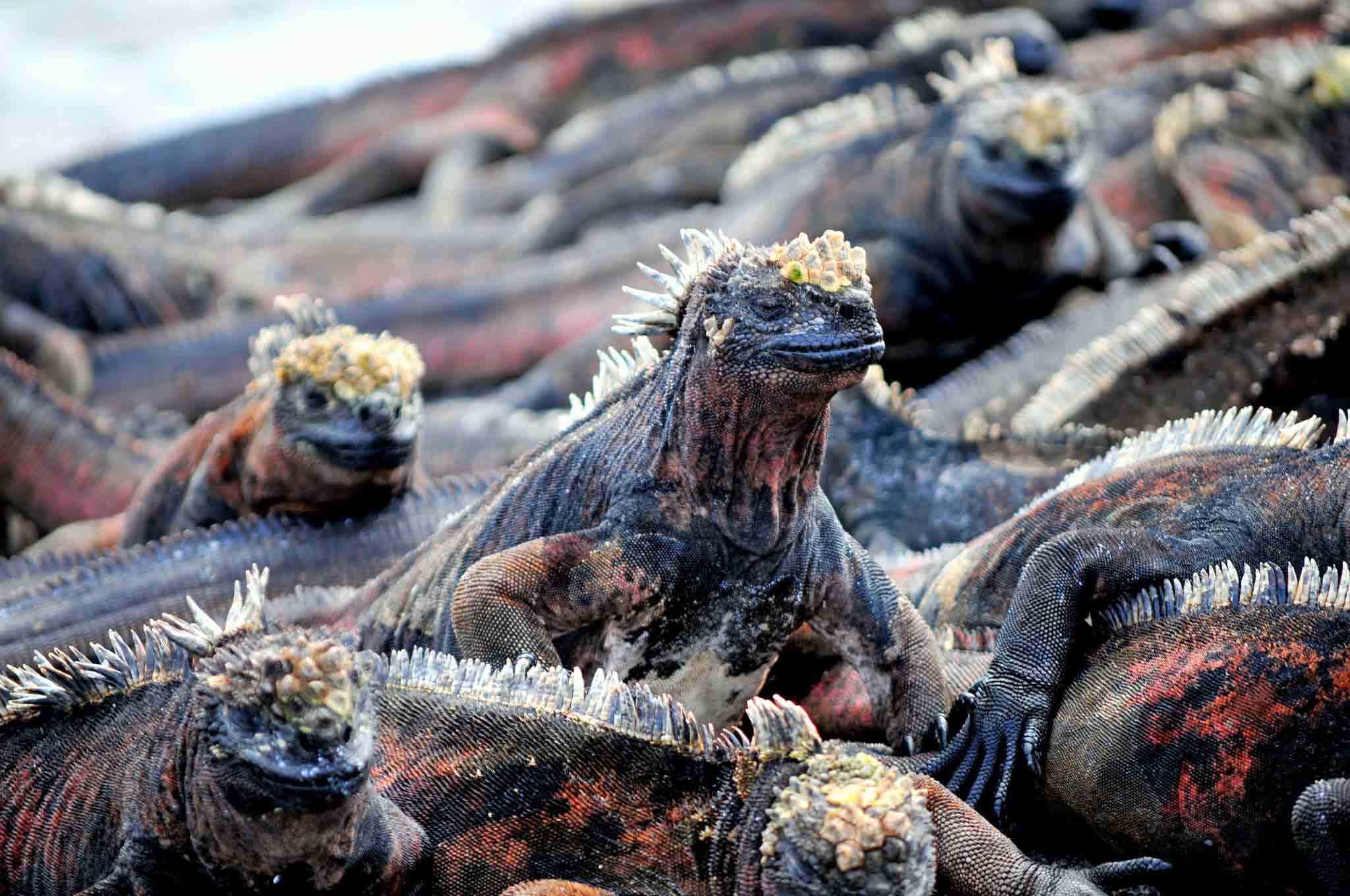 James is a large, somewhat barren island northwest of Santa Cruz with a mostly volcanic landscape. Its name is equivalent to Saint James in English; it is also known as San Salvador, after the first island discovered by Columbus in the Caribbean Sea. This island has an area of 585 km² and a maximum altitude of 907 meters.

Santiago actually consists of two coalesced volcanos: a typical shield volcano on the northwest end and a low, linear fissure volcano on the southeast end. Suble differences in lava chemistry confirm that there are two volcanos here, and indicate that each has its own plumbing system and each taps a different melting zone in the mantle. The shield reaches an elevation of 900 m (2975 feet) in an area north and west of the center of the island. The northwest highlands also appear to be the oldest part of the island. Lavas from Santiago are as old as 750,000 years, based on K-Ar dating. Elevations on the southeast part of the island do not exceed 250 m (800 ft).

Marine iguanas, sea lions, fur seals, land and sea turtles, flamingos, dolphins and sharks are found here. There are a large number of goats and pigs, animals which were introduced by humans to the islands and have caused great harm to the endemic species. Darwin Finches and Galapagos Hawks are usually seen as well as a colony of Fur Seals. At Sullivan Bay a recent pahoehoe lava flow can be observed.

James Bay at the western end. Puerto Egas with its black sand beaches was the site of small salt mining industry in the 1960s. A hike inland to the salt crater is an excellent opportunity to sight land birds such as finches, doves, and hawks. A walk down the rugged shoreline, especially at low tide, will turn up many marine species. Iguanas bask on the rocks and sea lions laze in the tide pools. At the end of the trail there is a series of grottoes or sea caves where fur seals and night herons are found resting on shady ledges.

The wet landing on the dark sands of Puerto Egas, James Bay leads to one of the more rewarding visits in the Galapagos. First, a trail leads inland to the remains of a salt mining operation, one of several largely unsuccessful attempts to commercialize the Galapagos. Some groups will make the 1 hour round trip to the Sugarloaf Volcano (about 1000 ft elevation). But it is the Fur Seal Grotto that produces the most pleasure for visitors. Here one can get very close views of both fur seals and sea lions in a series of rocky pools. For many, this is the only opportunity to see the Galapagos fur seal, once thought to be on the verge of extinction. In addition to the fur seals. James Bay offers the best opportunity for tide-pooling in the Galapagos.

A particularly scenic area of steep cliffs and dark beaches. A large population of feral goats now frequents this part of the island. Part of the point has been fenced off to protect the native vegetation from their destructive foraging. Located on the northwest corner of the island, this area was a haven for pirates during the 1600s and I700s. This is typically a cruise-by point due to the sometimes unsafe (wet) landing conditions (when the sea is active) and the lack of unique wildlife. Also, the large fenced-in vegetation area doesn't make it the most popular of Visitor Sites.

On the eastern coast of James Island is Sulivan Bay, where a large pahoehoe (ropey) lava flow dates from an eruption in 1897. A walk over this glazed black rock gives the impression of the still-molten lava, as every ripple, swirl, and bubble in its surface has been preserved. Only the occasional pioneering Mollugo plant gives a clue of the time needed for species to colonise such an expanse.

Sullivan Bay is especially fascinating for those who are interested in geology and volcanology. You can take a spectacular walk over the uneroded, black lava flow covered with lava bubbles and tree-trunks mold in the surface. There are two small beaches where turtles come for nesting.

About 5 km from Puerto Egas lies the Playa Espumilla. Behind this brown-sand beach there are two lagoons where you can observe flamingos if you are lucky. Those graceful birds move from lagoon to lagoon on their search for crabs.
Nesting sea turtles are also found here.