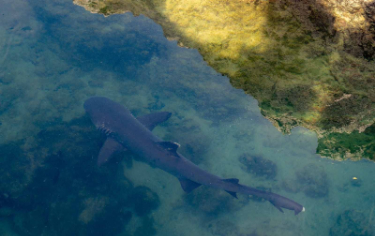 AM – Flight to Baltra Airport (GPS)

Upon arrival at Baltra Airport, you will pass through an airport inspection point to insure that no foreign plants or animals are introduced to the islands, as well as to pay the park entrance fee of $100 (unless it has been prepaid). A guide will meet you, help you collect your luggage, and escort you on a short bus ride to the harbor.

Although the great majority of Galapagos visitors come here to observe and appreciate natural wonders, it is also interesting to learn how the protection and conservation of the islands are carried out. The main attractions are the National Park information centre, the Van Staelen Exhibition Hall, the Breeding and Rearing Centre for young tortoises, and adult Galapagos tortoises in captivity.

A delightful place to be reached by a nice zodiac ride. “Tintoreras” are small islands in front of Puerto Villamil coast. There is Heron lava on the lookout on mangrove branch, and Galapagos Penguin and sea lion often pop out on shore. White-tipped reef sharks are fairly common in the archipelago. Their name in Spanish is Tintorera, thus the name of this site as they are always found here resting in the shallow waters.

In the Arnaldo Tupiza Tortoise Breeding Centre you can see hundreds of giant Galapagos tortoises of all sizes. Vulnerable hatchlings are not gigantic at all, even smaller than the size of your hand! This project just outside Puerto Villamil was created to rescue the endangered populations of Isabela’s both southernmost volcanoes. From the almost incredible estimations of 250,000 giant tortoises in the 16th century, by the 1970s there were only about 3,000 individuals remaining. One thing beco mes clear on your visit: it’s hard work to save these creatures from extinction by reproduction in captivity and repopulation. The good news is that these programmes are successful and have already saved several species from extinction so far. By 2015 their number increased to about 32,000 in all the archipelago. Don’t forget to visit the native botanical garden of this breeding centre. It also attracts colourful songbirds such as yellow warblers, Darwin’s finches, Galapagos and vermillion flycatchers. Finally there is no greater counterpart to the cumbersome tortoises than the graceful American flamingos which frequently filter the saline waters of the adjacent lagoon for shrimp and algae. They are joined by a handful of species of aquatic and shore birds, from which some even migrate from Canada and Alaska.

Punta Moreno is located on the north coast of Isabela Island between the volcano Sierra Negra and Cerro Azul volcano. The trail runs along a lava flow Pahohoe (solidified lava in the form of corrugated or an accordion) into a complex of coastal lagoons, its main attraction are several species of birds which can be found around this lakes and mangroves

This is a marine visitor site, so the excursion has no landing point. Your zodiac ride starts with a visit to the Marielas islets, home to the largest and most important penguin colony on the Galapagos Islands. The excursion continues into the cove, surrounded by red mangrove, where you can admire their red roots and green leaves. Here, you are able to observe sea turtles, flightless cormorants, spotted eagle rays, golden rays, brown pelicans and sea lions. Frequent visitors have been able to see Galapagos hawks soaring overhead with schools of pompano and dorado fish swimming down below.

Fernandina is the third largest island in the archipelago and has a single visitor site: Punta Espinoza located at the northeastern tip of the island. Marine iguanas conglomerate in larger groups than in any other island. They bask around in the sand, swim near the shore and sometime block the way at the landing dock. Among the unique species found here, is the Flightless Cormorant. This bird had to adjust its way of survival and perfection its skills of finding food in the ocean. Their wings, tails and feet progressively adapted for swimming. To see these birds, is to witness evolution happening right in front of you.

Tagus Cove, a tour along the cliffs in a zodiac will give the visitors a good chance to see the Galapagos penguin,

the flightless cormorant  and other sea birds. From the landing dock it is about a 30 minute hike along the trail up to the top of the cliff from where you can view Darwin Lake, an uplifted ultra-saline lake saltier than the sea. You can also see several volcanoes from this location. Look carefully at the graffiti on the surrounding cliffs of the cove, it has been written by pirates, whalers and buccaneers in past centuries.

Espumilla beach is located at the northern coast of Santiago Island in James Bay. During the last presence of the “El Niño phenomenon”, one of the two lagoons of this site underwent a process of sedimentation, thus causing the disappearance of a representative colony of flamingos. The main attraction is the palo santo forest. The beach is an important site for nesting marine turtles. At the nearby Buccaneers Cove we have a great snorkeling opportunity.

Its black beach is located at the west side of the island and is its main attraction. Volcanic tuff deposits have favored the formation of this special black sand beach. This site is called Puerto Egas, because there was an attempt of the company of Hector Egas to start the exploitation of salt. It failed, because the price of salt in the continent was very low and did not justify its exploitation in Galapagos. Thus the project was abandoned.

If your already know a bit of Spanish, you will not be surprised by what you will get to see at Lobos Islet… its beach harbours a colony of Galapagos sea lions. As in other colonies in the archipelago you can approach nurturing females within a few metres. In the breeding season this colony is also visited by very territorial males, defending and mating the harem on their part of the beach. Though at first sight the barren rocks are overgrown by palo santo, this low islet houses has more than just Galapagos sea lions. Two other emblematic species of the Galapagos also breed here. Male blue-footed boobies and great frigate birds try to impress the females (and tourists) with clumsy dances, heaving their striking blue feet or blowing up their balloon-sized scarlet pouches. Later in the breeding season the fluffy and hungry chicks cry for food and when their wings are strong enough they will learn to fly.

You can also find a lot of life in the intertidal zone, including the striking bright orange sally light foot crabs and marine iguanas on the boulders. Sand dollars (a kind of sea urchin), among other marine life, have been washed ashore on the beach and remained at low tide. Remember that it’s strictly forbidden to take home anything you find in the National Park. On the horizon you can distinguish the contours of 10km / 6.2mi distant Kicker Rock. That impressive rock islet has become one of the landmarks of Galapagos, together with the blowhole on Española, Pinnacle Rock on Bartolome, and the remote northern rock arch of Darwin.

Check-in and flight back to Guayaquil or Quito.

Assisted by the guide and some crew-members the dinghy will bring you and your luggage to Puerto Baquerizo Moreno, where we board a private bus to the airport. Your guide will accompany you to the check-in counter in the departure hall. You will return home not only with stunning pictures, but also  unforgettable lifelong memories!