Focussing on natural history, sustainable travel and a jolly good time, Silversea’s voyages to the Galapagos are nothing short of spectacular.
Day 1: Baltra and Daphne Major
Baltra Island, also known as South Seymour, is truly the entrance to the Galapagos Islands. Despite not being considered as part of the National Park proper, Baltra definitely offers a taste of the weird and wonderful nature that thrives on the islands. The island is located in the central part of the archipelago. At just eight sq. mi it is one of smallest islands, yet its flat, volcanic rock surface and central location in the archipelago makes it an ideal place for one of the islands’ two airports. The airport was built by the US Air Force, who used it as an army base during WWII. As a travel destination in itself it offers few attractions, and all travellers who come here are just passing through, either on either way to or from the islands. There is no tourism infrastructure (save a few agencies that offer tours of the islands) or shops on Baltra and any purchases that you might wish to make should be done at the airport if they can. However, land iguanas and Galapagos finches are popular sights, and the iguanas are often seen running across the runway itself. You will be amazed how playful sea lions and some sea birds welcomed you at the pier.

North of Santa Cruz Daphne Major is a small volcanic island, a sparsely vegetated tuff cone with an area of less than half a square kilometer. It is extremely difficult to land on and can only be visited by special permit. Most ships only cruise past it or might even circumnavigate the island. Devoid of larger trees, the rim of the volcano’s cone rises to 120 meters. Cactus bushes, small trees and herbs provide food for several finch species –and a ground-breaking study in evolution over a forty year time span showed how food resource availability has led to evolutionary changes in finches. Apart from these small land birds, Red-billed Tropicbirds, Magnificent Frigatebirds and Nazca and Blue-footed Boobies also nest on Daphne Major and can often be seen soaring.
Day 2: Genovesa Island
Genovesa is one of the northernmost islands of the archipelago. Genovesa’s southern side of the shield volcano’s crater collapsed and a protected bay known as Darwin Bay was formed. The island is often referred to as the “Bird Island” as the numbers and species of land and seabirds on Genovesa are quite extraordinary. There are two visitor sites, and Prince Philip’s Steps give access to the flat plateau above the bay. Named after Prince Philip who visited the Galapagos on two occasions, the “steps” are mostly natural. The steep cliffs are home to Red-billed Tropicbirds, while Magnificent Frigatebirds, Nazca and Red-footed Boobies prefer the top. The plateau above Prince Philip’s Steps has a palo santo forest and an extensive lava field. This is an area where one of the Galapagos’ top predators, the Short-eared Owl, is hunting storm petrels. The Short-eared Owls are extremely well camouflaged and are not always easy to spot in between the rocks.

At Genovesa Island the ship tucks into Darwin Bay, an ancient volcanic crater now flooded by the sea. Zodiacs land on a picturesque sandy beach where Galapagos sea lions often rest on the fine, white sand. Explorations along the shore may reveal marine iguanas looking like prehistoric dinosaurs in miniature. By heading inland a short distance visitors could encounter seabirds of all shapes and sizes nesting in the vegetation. Scores of immature Red-footed Boobies perch on branches within an arm’s reach of the path. In addition, watch for Great Frigatebirds and Yellow-crowned Night Herons along the walk. There is also fantastic snorkeling in the waters of Darwin Bay with the opportunity to see large schools of reef fish and brightly colored sea stars.
Day 3: North Seymour Island & Sullivan Bay
The landing at North Seymour Island is onto black lava rock. After a short climb, visitors arrive on the island’s flat plateau where a number of sea lions nurse pups and frigatebirds nest. The island is dry, and so the predominant tree is the prickly pear cactus favored by the Galapagos land iguanas that live here in number. The undulating terrain is littered with red-brown volcanic boulders and large male Magnificent Frigatebirds can be seen inflating their vivid red gular sacs in hopes of impressing females flying overhead. At certain times of the year, pairs of Blue-footed Boobies dance here in a ritualized mating dance that reinforces their pair bond and shows off their vivid blue feet. The snorkeling here is well-known for schools of colorful creole wrasses and parrot fish.

The lava fields of Sullivan Bay on Santiago Island will inevitably remind visitors of the surface of the moon. As brilliant red Sally Lightfoot crabs scuttle along the black volcanic shores, learn about the formation of the islands through geological forces from your guides. The lava flows here are just over one hundred years old and date back to 1897. The lava took on a rope-like appearance and geologists have adopted a Hawaiian word, pahoehoe, as the technical name for this kind of volcanic rock.
Day 4: Fernandina Island & Isabela Island
Among the impressive new lava fields of Fernandina Island hides a cove surrounded by mangroves. A rewarding place for bird-watching as the bay is the point where the land meets the sea, joining the two environments, with sea birds, shorebirds and land birds all in the same place. The different species of mangroves: Red, White and Black, have formed a root system that serves as a nursery for many species of fish, including juveniles’ sharks and green sea turtles. Snorkeling is as rewarding with some unique sightings as Marine Iguanas feeding on algae, or flightless cormorants diving for their prey.

Impressive Pahoehoe lava field that lies between two active volcanoes, Sierra Negra and Cerro Azul, on the south coast of Isabela Island. The rich waters of Cromwell Current wash the shores, and as a result, you can see the largest marine iguanas of the archipelago basking on the rocks, Flightless Cormorants and Galapagos Penguins diving for food. During the walk you will experience, as an oasis in a desert of lava, some coastal lagoons in the middle of the field, here you can find shorebirds such as White-cheeked Pintail Ducks, Black-necked Stilts and even sometimes Flamingos.
Day 5: Santa Cruz Island & Santa Fe Island
Silver Origin will anchor in front of Puerto Ayora, Santa Cruz, where the prestigious Charles Darwin Research Station is located. The station also houses the Fausto Llerena Breeding Center for giant tortoises and land iguanas where guides interpret the centre’s captive breeding and reintroduction programs. In addition to these star species, throughout the station there are huge prickly pear cactus trees being fed upon by the pretty Galapagos Cactus Finch. To round out the stay in Puerto Ayora, enjoy free time in town where local artists have created charming art galleries and corner cafés.

This island is home to a reptile that exists nowhere else in the world: The Santa Fe Land Iguana. A beach covered by sea lions is the beginning of our adventure where sea lions’ pups welcome the visitors with their naive curiosity. Then a rocky terrain will guide us to explore the island and the view from the cliff becomes a reward by itself. View some of the tallest and the widest prickly pear cactus of the islands. Also know for beautiful snorkelling and kayaking.
Day 6: Española Island
Located on the northern coast of Española, the turquoise colour water and white sandy beach stand out from far away. This beach is made out of pulverised shells and corals offers a sandy patch of up to 1 kilometre in length. Española is considered one of the oldest in thev Galapagos and has thus developed species that are endemic. Along the coast of Gardner a subspecies of colourful Marine iguanas are living among Hood Mockingbirds. The apex predators Galapagos Hawks commonly visit the coastline and a couple of times a Giant tortoise has been seen here.

Punta Suárez lies at the western point of Española, the oldest island in the Galápagos. Sheer cliffs provide superb thermals for seabirds and you may spot Swallow-tailed Gulls, Nazca Boobies and Blue-footed Boobies on the breeze. The largest seabird to nest in the Galapagos Islands is the Waved Albatross. These ocean wanderers can be seen seasonally here from April through December, when pairs reunite on Española, going through an elaborate pair-bonding display. Mockingbirds, doves, and occasional Galápagos Hawks can also be seen on the point, along with sea lions and colorful marine iguanas.
Day 7: San Cristobal Island
Like so many of the islands in the Galapagos, San Cristobal is formed by dormant volcanoes. It lies to the east of the archipelago and is one of the oldest islands in the group. Approximately 8,000 people live on the island, making their living from tourism, fishing, in government offices, or off the rich volcanic soils with some limited farming existing in the highlands. Puerto Baquerizo Moreno on the southwestern tip of the island is the capital city of the Galapagos Islands. A statue of Charles Darwin graces the harbor, marking one of the first places he likely stepped ashore in the 1830s.

An impressive tuff cone has been carved by erosion into an outstanding natural sculpture, being a resting place for marine birds such as blue-footed bobbies and brown pelicans. One of the most beautiful white sand beaches of the Galapagos (swim or snorkel). View sea lions, sally light footed crabs, blue-footed bobbies. Behind the dunes, you find a coastal lagoon, which was visited in the past by the locals to extract salt, today it is home to some shorebirds such as stilts and plovers.
Day 8: San Cristobal Island
When travelling in remote regions tide, wind, ice and weather conditions determine the details of our itinerary. While we will do our best to maintain all suggested activities, some of these may be subject to change. Come with an open mind and a great sense of adventure, together we can turn any voyage into a wonderful Expedition. 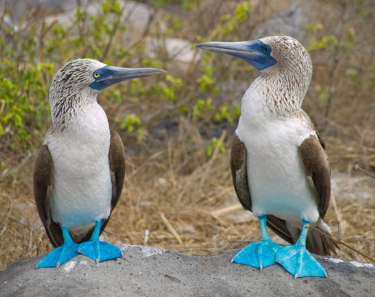 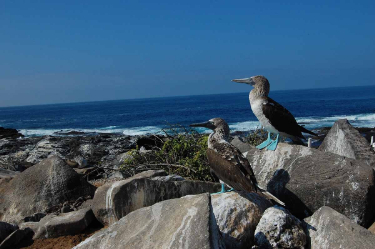 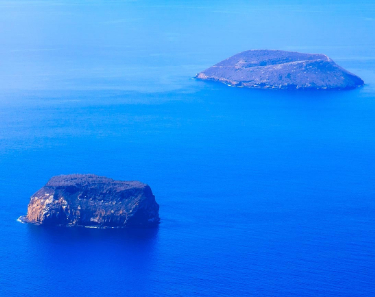 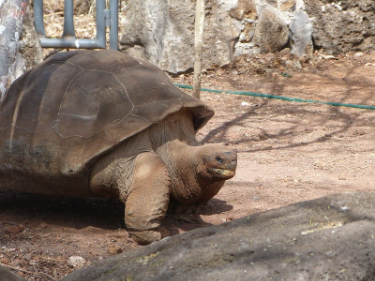