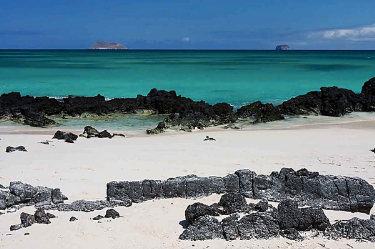 The visitor site Las Bachas is located in northern part of Santa Cruz Island, it consists of two beaches that have a combined length of about 1 km long. The name Las Bachas originates from the Second World War, when the American army left two barges discarded on the beach, the first settlers could not pronounce the name correctly in English, which resulted in Las Bachas Beach. The predominant vegetation is of the coastal zone. It represents one of the main nesting sites of sea turtles (Chelonia mydas) on Isla Santa Cruz. It is a good place to see flamingos, as well as migratory and aquatic birds.

North Seymour’s topography is flat and strewn with boulders due to its origins as an uplifted, not volcanic, island.  You should expect to see large populations of magnificent Frigate birds due to the idea nesting sites, Blue- footed boobies perform their courtship dance in the more open areas and swallow-tailed gulls perch on the outer shore.  Sea lions and Marine iguanas can also be seen hauled out on the beach.

Dragon Hill-  The visitors site at Dragon Hill is located in northwestern Santa Cruz Island, and consists of a trail that runs through three different environments at just 1,600 m long.

It gets its name because in 1975, was one of the only places in the Santa Cruz Island where there were land iguanas (Conolophus subcristatus) in healthy state. That same year, the Galapagos National Park and the Charles Darwin Foundation initiated a program to conserve land iguanas. The iguanas on North Seymour (originally from Baltra), iguanas from Cartago Bay (Isabela Island) and iguanas of Santa Cruz Island were studied and then transported to pens especially designed for these animals to breed in captivity. By 1979 first iguana were born.

The entire iguana population of Cerro Dragon was transported to the Venice Islet to keep the away from the wild dogs which in those days abounded in the place. Soil from the base of Cerro Dragon was also transported to Islet to create an appropriate environment for nesting iguanas. It was necessary to separate the Venice Islet from Santa Cruz Island with a barbed wire fence to prevent predator dogs from crossing to the Islet, which is separated from the island by a very narrow channel. Several iguanas that were reproduced in Venice were returned to Cerro Dragon in 1990.

Currently there are no dogs in Cerro Dragon, and the Galapagos National Park Service performs constant monitoring of cats and donkeys.

In the lagoons at this site, there is shrimp (Artemia salina), the same as is the food of flamingos; at certain times of year they are more abundant and therefore the population of these birds is larger. During rainier times the water of the lagoons become too sweet and therefore shellfish populations decline, and shorebirds also become scarce

Charles Darwin Research Station was founded more than Twenty years ago to assist the National Park Service in its efforts to save Galapagos wildlife, the station plays an important part in monitoring and assessing the state of the islands.  Today you will find buildings housing the different scientific areas of the station, a library and homes of scientists and tortoise keepers. The museum at the station has a facility for rearing tortoises, a project to increase the depleted population.   Also the world famous lonesome George can be found with in the stations breading program.

El Chato: An amazing opportunity to see the magnificent giant land tortoise in its natural habitat, having just seen the tortoise in the breading program in the station, you can now see them bathing and eating in the wild (depending on the season).  This area is vegetated with transition zone vegetation and is located in the humid zone of the highlands of Santa Cruz.   The walk to the reserve is one of the best places to observe ground birds, tree and ground finches, the vermillion flycatcher, cattle egrets and occasionally galapagos rails.

As one of the oldest islands, Floreana has the most interesting human history.  It has stories of marooned whales, prisoners and colonists as well as bizaree disaperances and even murders!  It is made up of numerous extinct volcanic cones and has an established extensive scrubby vegetation.

Cormorant Point; offers two highly contrasting beaches. The landing beach is of volcanic origin and is composed of olivine crystals, giving it a greenish tinge. At the end of the short trail is a carbonate beach of extremely fine white sand, formed by the erosion of coral skeletons, it is a nesting site for green sea turtles.

Post Office Bay; significant for its human history. In 1793, James Colnett, the captain of a whaling vessel, established the wooden post barrel on Floreana. Whaling ships, typically offshore for two years at a time, frequented the archipelago Outbound ships would drop off letters after rounding the cape and the ships returning home would mail them. Over the years, thousand of ships have stopped to send and receive mail at Post Office Bay. This will be your opportunity to partake in this amazing postal service.  You will be given letters to take home and mail to their intended recipients, and also have the opportunity to drop off letters ourselves.

Española, the southernmost island, has the densest and most diversified concentration of wildlife. Suarez Point; is home to  Blue footed boobies, Nazca boobies, swallow-tailed gulls, oystercatchers and the majestic waved albatross breeding grounds.  This makes this site one of the richest wildlife locations in the Galapagos Islands. The area is famous for it marine iguanas with unique copper-red patches.

Gardner Bay; An amazing white sand beach with stunning turquoise shallows beautiful to walk, swim or snorkel. You could just sit and admire the extrovert mockingbirds and the sea lions.

Breeding Center: here it is explained, in a simple manner, the natural phenomena that created the Galapagos Islands. They explain the series of natural processes, such as volcanic eruption and marine current locations that have lead to the amazing islands that you are now visiting.

Lobos Island as its name suggests is famous for its population of sea lions and fur sea lions.  You will also encounter a nesting ground for the great frigate bird and a small number of blue footed boobies

South Plazas, an uplifted island, like Baltra, it is highly populated by sea lions, over 1000 inhabit this island residing in 10 harems each one attended by a male. One of the characteristics of this island is its vegetation of Opuntia Cactuses and sesuvium plants. This small island offers cliffs with swallow-tailed gulls, red-billed tropicbirds

Black Turtle Cove is one of the most beautiful marine sites; located in a small mangrove lagoon. It is a nursery grounds for  many marine species such as sharks, spotted eagle rays and sting rays. Also it is a favored breeding ground for the sea turtle.  It is also a wonderful site for watching, herons, finches and blue-footed boobies feeding.  This site does not involve a land visit; it is all seen from the small zodiac boats.

Return to Baltra Island and finally your flight home. We Hope you enjoy your visit with us.