Day 1: Santa Cruz Island: Charles Darwin Station
Morning:Arrival to the airport in Baltra, reception by the cruise guide and transfer to the yacht.
Afternoon: Lunch service. Visit to Charles Darwin Scientific Station and Breeding Center*. Dry landing.
*The main visit in Puerto Ayora is to Charles Darwin Station. An excellent way to begin learning about the islands, their origin and formation. You will learn about how the Galapagos turtles are raised and meet Jorge, the famous solitary turtle. The Scientific Station has its own beach that receives many visitors on weekends.
Evening: Guide briefing. Dinner service and navigation to Isabela Island.
Day 2: Isabela Island: Moreno Point & Urbina Bay
Morning: Breakfast service. Dry landing. Visit to Moreno Point*. Deep water snorkeling.
*Moreno Point is a place where the forces of the Galapagos have joined to create a work of art. The tour starts with a panga boat ride along the beautiful rocky shores where Galapagos Penguins and shore birds are frequently seen. After a dry landing the path traverses through jagged black lava rock. As the swirling black lava flow gave way to form craters, crystal tide pools formed-some surrounded by mangroves. This is a magnet for small blue lagoons, pink flamingos, blue herons, and Bahamas’ pintail ducks. Brown pelicans can be seen nesting in the green leaves of the mangroves. You can walk to the edge of the lava to look straight down on these pools including the occasional green sea turtle, white-tipped shark and puffer fish. This idyllic setting has suffered from the presence of introduced species. Feral dogs in the area are known to attack sea lions and marine iguanas.
Afternoon: Lunch service and navigation to Urbina Bay*. Wet landing. Nature walk** and more wildlife watching. Shallow water snorkeling.
*Lying at the foot of Alcedo Volcano, south of Tagus Cove, is Urbina Bay, one of the best and the most recent example of geological uplift in the Galapagos. Uplifts occur when the molten materials beneath the surface shifts. In 1954 the shoreline was uplifted by nearly 15 feet (4 meters). The coastline was driven 3/4 of a mile further out to sea, exposing giant coral heads and stranding marine organisms on what was now on shore. A Disney film crew visited the site shortly afterwards and discovered skeletons of sharks, sea turtles and lobsters unable to find the ocean from the rapidly rising land. Schools of fish were found stranded in newly formed tide pools. Boulder sized coral heads can be seen near the area that once was the beach. The uplifting of Urbina Bay was followed by an eruption of Alcedo a few weeks later.
Seasonally Urbina Bay provides a nesting area for many of the Galapagos creatures. Female tortoises journey down from Alcedo to lay their eggs in the sand. Galapagos penguins, flightless cormorants and brown pelicans nest in the area as well.

**The visit begins with a wet landing on the white sand beach. Difficulty of the route varies by season. The trail ranges from stark and easily passable during the dry season to mildly challenging requiring wading to pass during the rainy season. Visitors cross the uplifted region learning about this geological wonder. Then reach the sandy area that was once the beach. Shorter visits return to the landing point on the same path, while longer visits continue past the coral heads and new beach.
Other highlights of this site include marine iguanas and some of the largest land iguanas in the islands, and Galapagos Cotton an endemic plant, historians believe the Incas brought to the islands, while naturalist theorize it floated across from Peru.
Evening:  Guide briefing. Dinner service and navigation to Fernandina Island.
Day 3: Fernandina Island: Espinoza Point & Isabela Island: Tagus Cove
Morning: Breakfast service. Visit to Fernandina Island. Wet landing. Nature walk on Espinoza Point. Deep water snorkeling.
*Fernandina Island is the youngest and most active volcano in the Galapagos, with eruptions taking place every few years. The flat lava of Punta Espinosa offers a stark and barren landscape, but here flightless cormorants build their nests on the point, sea lions sprawl on the beach or play in the tide pools and large numbers of marine iguanas dot the sand. We also will have the opportunity to compare the Aa and Pahoehoe lava types here.
Afternoon: Lunch service and navigation to Isabela Island. Visit to Tagus Cove. Dry landing. Nature walk*. Panga boat ride. Deep water snorkeling.
*Tagus cove (Isabela Island) is situated directly east of Fernandina Island on the west coast of Isabela Island. It is a beautiful, well-protected cove sheltered by the shoulders of two volcanic craters and has been used as an anchorage for over 300 years. A nature trail here ascends through the typical dry vegetation zone and offers spectacular views of Darwin Lake, a saltwater crater lake and the long narrow inlet that appears to connect with it. At the top of the trail it is possible to observe the different vegetation zones, catch a glimpse of Darwin and Wolf volcanoes, and observe Galapagos Penguins, Flightless Cormorants and Pelicans.
Evening:  Guide briefing. Dinner service and navigation to Santiago Island.
Day 4: Santiago Island: Puerto Egas, Salt Mines, Espumilla Beach & Buccaneer Cove
Morning: Breakfast service. Wet landing. Visit Puerto Egas*: nature walk, salt mines** and fur seal grotto***. Shallow water snorkeling.
*A visit to Puerto Egas begins with a wet landing on the dark sand beaches of James Bay. Taking a walk along the rocky coast offers visitors the opportunity to view some of the Galapagos Island's best tide pools. Sponges, snails, hermit crabs, barnacles and fish including the endemic four-eyed blenny can be seen. The walk also presents visitors with a variety of shore birds, marine iguanas, sally light foot crabs and sea lions.

**There are two interesting excursions conducted from Puerto Egas. The first is a short walk from the landing site that brings visitors to the site of one of the Galapagos' first entrepreneur endeavors. For decades salt was extracted from a local salt crater. The industry was abandoned in the 1950's leaving behind a variety of rusted old machines and parts of buildings. The trail follows the path once used by wagon trains to the crater cone. The steep trail is easy, but can often seem one of the hottest hikes in the islands. Feral goats prune the arid vegetation, which lines the trail. The goats feed on any leaf within reach leaving little left for the endemic island creatures. Bird lovers will be delighted with the opportunity to catch a glimpse of one of Darwin’s finch, the endemic Galapagos hawk, or the colorful vermillion flycatcher.
Finally reaching the crater rim presents an incredible vista. Looking into the crater you are able to see this extinct volcano whose floor has sunken below sea level. Salt water seeps into the crater creating a small salt lake. The sun evaporates the water, leaving the salt that many have tried to mine without success.
Looking away from the crater are the older orange lava fields supporting vegetation including the Palo Santo trees and the younger desolate black lava fields.

***The second excursion begins just a short distance beyond the tide pools and heads to the fur seal grotto. Fur seals and sea lions can be seen swimming in the rocky lava ringed pools. This may be the only opportunity visitors have to see and swim with fur seals.
Fur seals were once hunted to near extinction for their coats. The Galapagos Fur Seal is the smallest of the fur seals found in the southern hemisphere, now compare in numbers with the sea lions. During the day they hide from the hot equatorial sun in shelves or caves of the rocky lava cliffs. At night they feed on squid and fish avoiding the sharks, which are their natural predator.
The crystal clear water, volcanic bridges, fur seals and sea lions make this a magnificent place for swimming and snorkeling.
Visitors who now come to Espumilla Beach mostly do so in search of birds rather than water. A short walk inland takes visitors through a mangrove forest normally inhabited by the common stilt. Sea turtles also visit these mangroves to nest. Beyond the mangroves is a brackish lagoon where flocks of pink flamingos and white cheeked pintails can be seen. The trail makes a loop heading over a knob into a sparely forested area then back to the beach. Along the way those with a watchful eye may spot a variety of Darwin finches or a vermilion fly catcher. Once back at the beach visitors may have the chance to swim or snorkel time permitting.
Afternoon: Lunch service. Panga boat ride to Buccaneer´s Cove*. Deep water snorkeling.
*Less than an hour north of Puerto Egas, Buccaneers Cove served as a safe haven for pirates, sailors and whalers during the 18th and 19th century. Anchoring in the protected bay they were able to make much needed repairs to their ships while other men went ashore to stock up on salt, tortoises, fresh water and firewood. Several years ago ceramic jars were found at the bottom of the bay, the disregarded cargo of some mariner from years ago. Inside the jars were supplies of wine and marmalade.
Few boats stop at Buccaneers Cove today. Though many cruise by at a slow speed giving visitors the opportunity to view the steep cliffs made of tuff formations and the dark reddish-purple sand beach. This dramatic landscape is made all the more impressive by the hundreds of seabirds perched atop the cliffs. Two of the more recognizable rock formations are known as the "monk" and "elephant rock". A large population of feral goats now frequents Buccaneers Cove and this portion of Santiago.  The National Park Service has fenced off part of the area to protect the native vegetation from the destructive eating habits of this introduced species. A wet landing on the large coffee-colored sand beach is just north of the prized fresh water supply that once attracted pirates and whalers.
Evening:  Guide briefing. Farewell cocktail. Dinner service and navigation to Daphne Island.
Day 5: Daphne Island & Baltra Island
Morning: Circumnavigation*. Breakfast service. Check out and airport departure at 8 AM.
*Among the central islands of the Galapagos Archipelago, Daphne Island sits north of Santa Cruz Island and west of Baltra Island. In reality there are two islands: Daphne Major and Daphne Minor. They are one of the more accessible Galapagos Islands and are easily reached by most tour boats and cruises. Please note that disembarkation on these islands is not possible, therefore we will sail around them for one last look at the beautiful vistas of Galapagos. 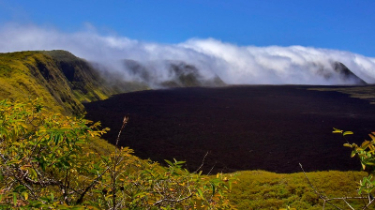 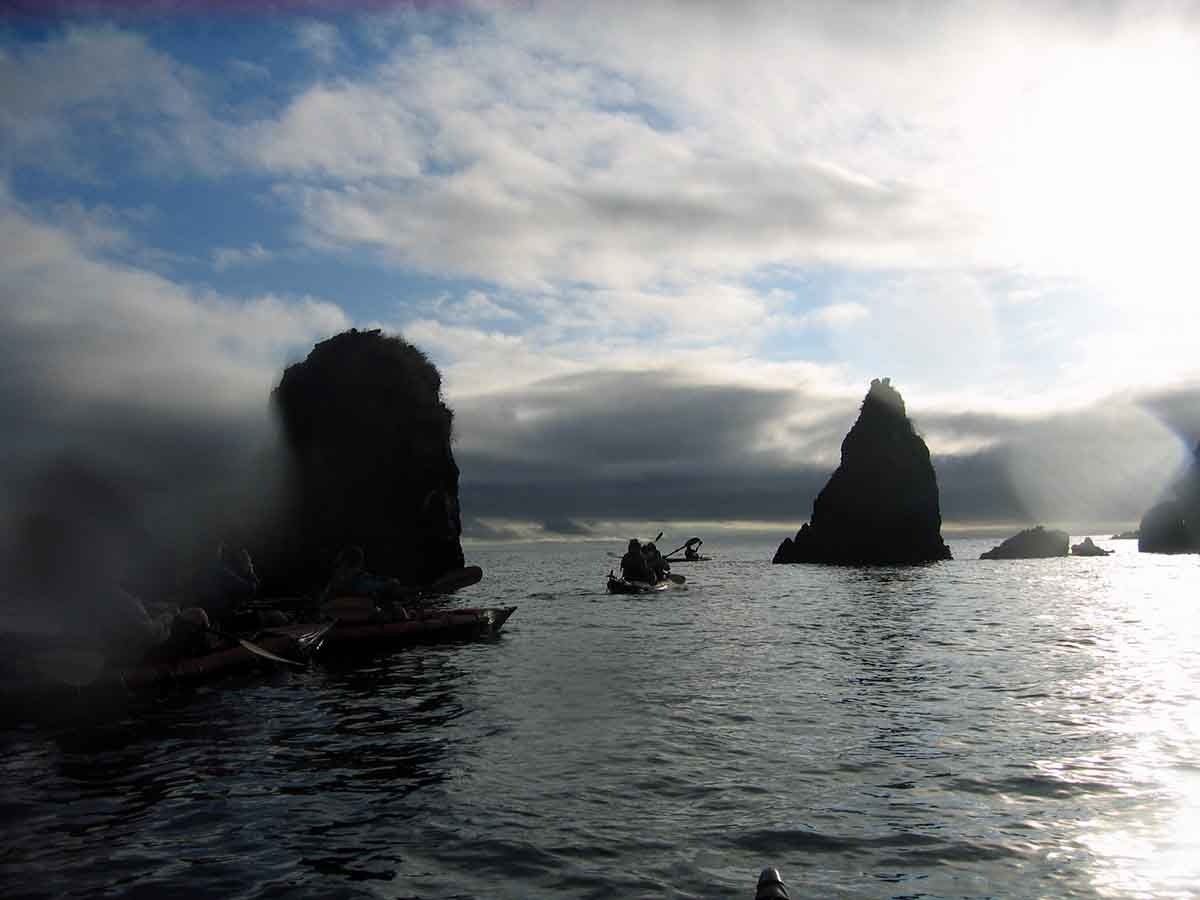 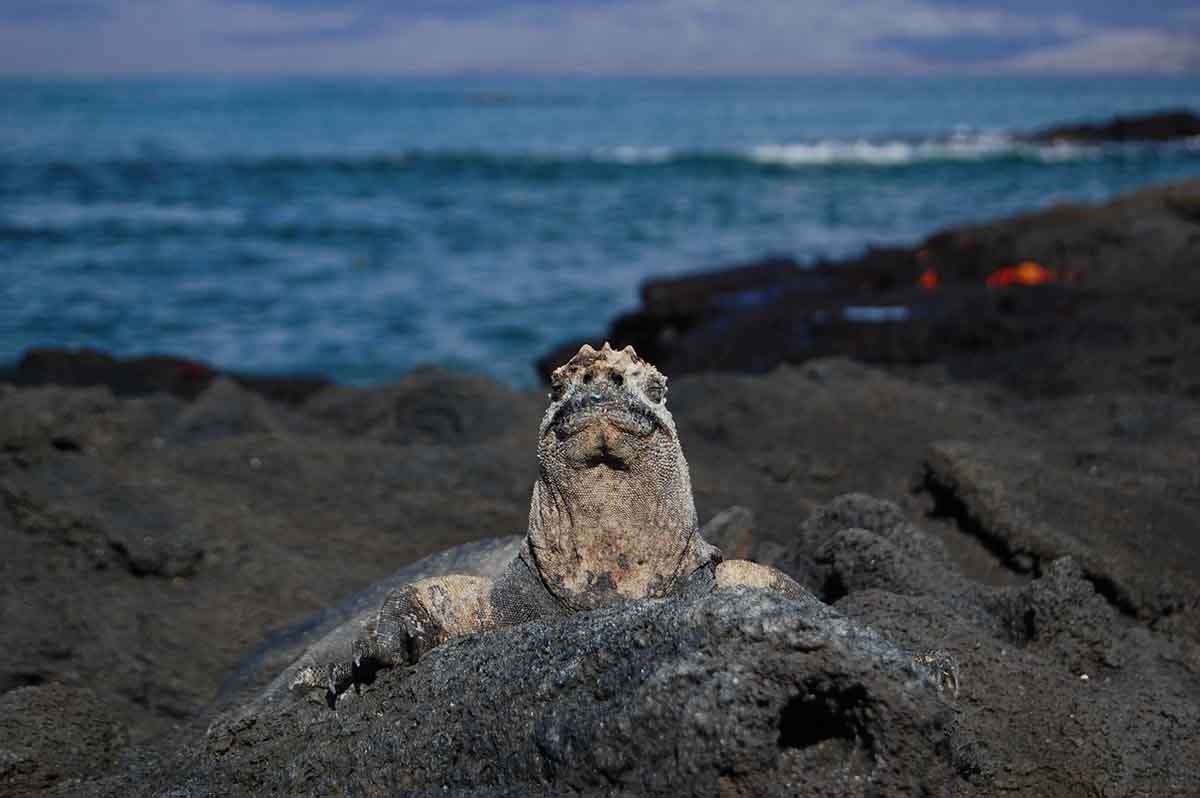 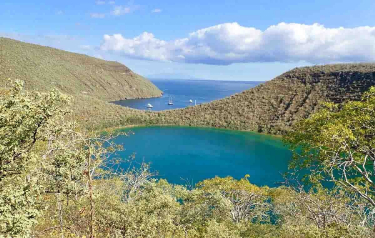